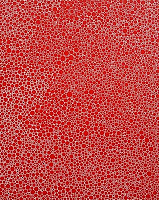 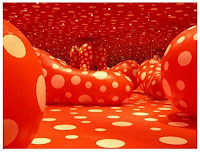 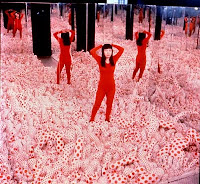 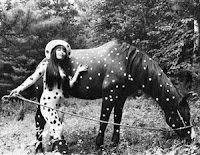 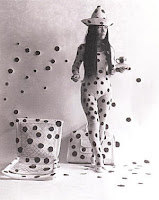 Yayoi Kusama obsessed with her polka dots.
"infinity nets," as she called them.
Yayoi Kusama said about her 1954 painting titled Flower (D.S.P.S),
"One day I was looking at the red flower patterns of the tablecloth on a table, and when I looked up I saw the same pattern covering the ceiling, the windows and the walls, and finally all over the room, my body and the universe. I felt as if I had begun to self-obliterate, to revolve in the infinity of endless time and the absoluteness of space, and be reduced to nothingness. As I realized it was actually happening and not just in my imagination, I was frightened. I knew I had to run away lest I should be deprived of my life by the spell of the red flowers. I ran desperately up the stairs. The steps below me began to fall apart and I fell down the stairs straining my ankle."
Posted by ***** at 9:22 AM 1 comment: 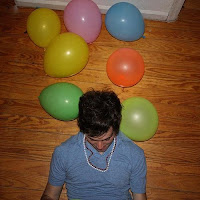 Me and Erik heard Washed Out for the first time today, we have been playing his songs to everyone now.....well atleast anyone passing by our studio!
We really love his music so much!
Its romantic with a beautiful dreamy mix of sounds to get lost into!
"You'll see it" is Eriks favorite....
Check out his myspace all the songs are wicked!
http://www.myspace.com/thebabeinthewoods
soo good!
Posted by ***** at 1:19 PM 2 comments: 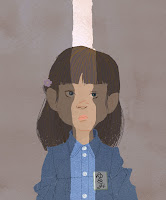 Heres a illustrated video my Dad did for us!
Its always fun to have him involved and great to get his interpretation of the music.
He been doing alot of really sweet pictures inspired by his childhood lately, me and my sisters when we were kids and just kids in the neighborhood. Above is one of my favorites.
http://www.yusuke.nagano.nu/
cheeers,
y
Posted by ***** at 3:51 AM 6 comments: 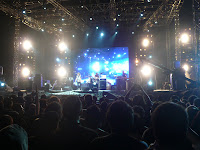 It Don't Move Me

Looking At The Front Door ; )